"What does that do? Why do I do that? Will that help? Why doesn’t this work? Are you in India? Are you a Drone? What time is it? Do you have pants on? Are you on fire?"
—A Customercon

Customercons are near-mindless, drone-like Transformers that are at war with the Arbitrary Autobots. Customercons are noted for their persistence, resilience, annoyance, lack of intelligence and inability to follow even the most simple of instructions. They attack in unrelenting waves, never stopping or letting up until their opponents are destroyed or their most inane questions are answered.

Nobody knows exactly where Customercons come from. They appear to spontaneously spawn from the deepest pits of Hfil as Protoforms. From there, they infiltrate Earth society disguised as regular earth vehicles and begin their campaign of annoyance and inanity.

Some have suggested that Customercons were created by some nefarious dark entity to do their bidding. However, others have dismissed this, claiming that it implies a level of control and planning that Customercons seem to be incapable of.

The Customercon’s most deadly weapon is its deadly array of inane questions which it will unrelentingly issue forth in battle. The power of these attacks have been known to stagger even the most powerful of Arbitrary Autobots. The best way to deal with a Customercon is to kill it deader then hell by any means possible. Under no circumstances are they to be talked to or reasoned with. 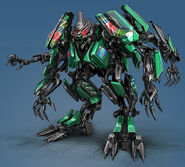 You can tell I’m not even trying, can’t you?
Add a photo to this gallery

Retrieved from "https://transfanon.fandom.com/wiki/Customercons?oldid=47737"
Community content is available under CC-BY-SA unless otherwise noted.