The Transformers Fanon Wiki, commonly called Transfanon, is a wiki for making up transformers characters, storylines, or anything else Transformers. Everything here is non-canon! None of it is real! This wiki was made by General Grham on July 1, 2007.

We allow users to make their own stories without them being deleted like they would be on the Transformers Wiki. They would only be deleted if they have offensive text or have no purpose and have little sense (Joke Articles are an exception).

The Transformers Fanon Wiki was proposed on June 20, 2007 and created on July 1, 2007 by General Grham with Troyb and Darthtyler to follow as administrators. Around the fifth of July is when we started to get more users.

When the wiki was in its first month of age on August first, it had a total amount of 16 users. It had an amount of 68 articles.

There are currently 3,393 articles, 5,849 images, and 1 administraters here since its creation. See here for more statistics. (Note: The statistics for the user amound is taken wiki-wide. It is not just from this small wiki) 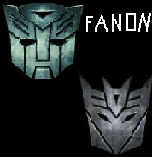 Our current logo.
Add a photo to this gallery

Retrieved from "https://transfanon.fandom.com/wiki/Transformers_Fanon_Wiki:About?oldid=8597"
Community content is available under CC-BY-SA unless otherwise noted.